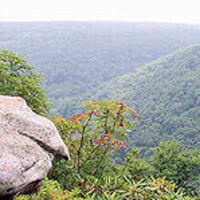 Forbes State Forest was named for Gen. John Forbes, who, in 1758, ordered the construction of a road from Bedford to Fort Pitt for the British Army's attack on Fort Duquesne. The forest comprises 15 tracts totaling almost 59,000 acres in Fayette, Somerset, and Westmoreland counties. Forbes spreads across the high ridges of the Laurel Highlands, including the 3,213-ft. Mt. Davis, the highest point in PA.

Hike Around the Highpoint

Rachel was very nice and helpful. The hike was very enjoyable. She even brought Apple cider for everyone. Thank you very much.

Rachel led an excellent hike to ID Trees in the winter. She was very informative and interesting. I learned more in those 2 hours about identifying trees by their bark, than I’ve known my whole life!

This event content is powered by Localist Event Calendar Software.