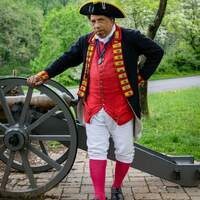 VIRTUAL - IN PARTNERSHIP WITH THE FRIENDS OF WASHINGTON CROSSING PARK THIS EVENT WILL BE HELD VIRTUALLY VIA ZOOM, NOT IN-PERSON.  Log -in information will be immediately sent upon registration.  Please check your "spam" folder if you do not receive the email.

Toward the end of the Revolutionary War, between 10 and 25 percent of Washington’s army consisted of soldiers of color. For these men, the Revolutionary War was actually two wars: while the country fought for its existence, Black soldiers struggled for their own freedom. And they had to choose a side.

Reenactor Noah Lewis (left), who portrays artillerist Edward “Ned” Hector, will lead a free virtual lecture on this topic on Sunday, February 7 at 1:30 PM. The lecture portion will last for about 45 minutes, and questions will be taken from the audience after the lecture.

Lewis is a living historian and the author of Edward ‘Ned’ Hector: Revolutionary War Hero. Lewis is well known for portraying Ned Hector: a free soldier of color who served as part of an artillery crew with the state militia called Proctor’s Third Pennsylvania Artillery, which later became the Fourth Continental Artillery. Ned Hector fought at Brandywine and Germantown and notably refused to let his team, wagon, and dropped armaments fall into enemy hands during the retreat from Brandywine.