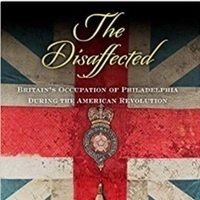 Lecture- "The Disaffected: Britain's Occupation of Philadelphia During the American Revolution"

THIS EVENT WILL BE HELD IN-PERSON IN THE VISITOR CENTER AUDITORIUM.  IT WILL ALSO BE LIVESTREAMED OVER ZOOM.  IF COVID RESTRICTIONS ARE REQUIRED IT WILL BE CHANGED ENTIRELY TO VIRTUAL.  REGISTRANTS WILL BE NOTIFIED OF CHANGES.  REGISTRATION IS REQUIRED.

Join author Aaron Sullivan as he discusses his book "The Disaffected".

He will explore the British occupation of Philadelphia, chronicling the experiences of a group of people who were pursued, pressured, and at times persecuted, not because they chose the wrong side of the Revolution but because they tried not to choose a side at all. For these people, the war was neither a glorious cause to be won nor an unnatural rebellion to be suppressed, but a dangerous and costly calamity to be navigated with care. Both the Patriots and the British referred to this group as "the disaffected," perceiving correctly that their defining feature was less loyalty to than a lack of support for either side in the dispute, and denounced them as opportunistic, apathetic, or even treasonous.