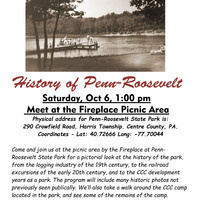 Come and join us at the picnic area by the Fireplace at Penn-Roosevelt State Park  for a pictorial look at the history of Penn-Roosevelt, from the logging industry of the 19th century, to the railroad excursions of the early 20th century, and to the CCC development years as a park. The program will include many historic photos not previously seen publically. We’ll also take walk around the CCC camp located in the park, and see some of the remains of the camp. Physical address for Penn-Roosevelt State Park is:  290 Crowfield Road, Harris Township. Centre County, PA. Coordinates - Lat: 40.72666 Long: -77.70044