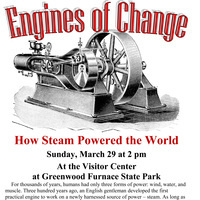 CANCELED through April 30 - Engines of Change: How Steam Powered the World

For thousands of years, humans had only three forms of power: wind, water, and muscle. Three hundred years ago, an English gentleman developed the first practical engine to work on a newly harnessed source of power – steam. As long as it was “fed” with a fuel, steam power worked tirelessly, and was the final link to bring on the Industrial Revolution. This program highlights how steam came to drive the modern world, and includes a demonstration with a working scale model steam engine.