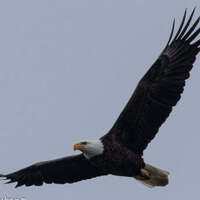 A few weeks ago, a pair of Bald Eagles have been seen in the park. They appear to be establishing a territory and future nesting site. The Park will be holding an in-person program on Bald Eagles at 7 pm on Saturday, May 8, 2021. The program will include a short informational session, followed by a watch party. Participation is limited to 35. Participants must wear a face mask or covering, and social distancing is in effect. Please call the Greenwood Furnace park office at 814-667-1800 to register by Friday, May 7. The program will begin in the area of Pavilions 3 and 4.

Bald Eagles are our national symbol, a bird immediately recognizable for its white head and tail. Despite this status, they were hunted or killed for sport. In the 20th century, the effects of scavenging dead animals as food decimated populations due to poisoning from lead ammunition, certain pesticides, and other factors. In much of the country, they were listed as an endangered species. As late as the 1970s, there were only 3 known nesting pairs of bald eagles remaining in the state. Through the Pennsylvania Game Commission, a re-introduction program was initiated, and today, there are over 300 nesting sites in the state. And it seems we may soon add Greenwood Furnace to that list!

Meet in area by Pavilions 3 and 4